Theoretical basis of Oleg Elagin’s new exhibition is a synthesis of term «augmented reality», which is widespread in mediaart, with a concept supplementarite, one of the keys in Derrida’s «Of Grammatology». Translated as «complementarity» or «augmentarity», it means the method of augmenting any phenomenon as an integrality on the assumption of immanent deficiency as a prime principle of existance.

According to Derrida, the emptiness, lying in the ground of reality, need in self-augmentarity in a way to integrality which is constantly slides away. The art in this sense is a negotiation of self-unexistance. The work of art is an object, which indicates the ultimate Nothing of itself.

Oleg Elagin’s digital art works as an instument of supplementarite dialectic’s dissection, that gives a new speech to the term «augmented reality». So, in this way nonmaterial digital texture finds it’s new body and new integrality by means of technologies of augmenting the visible world (including mobile supplements). 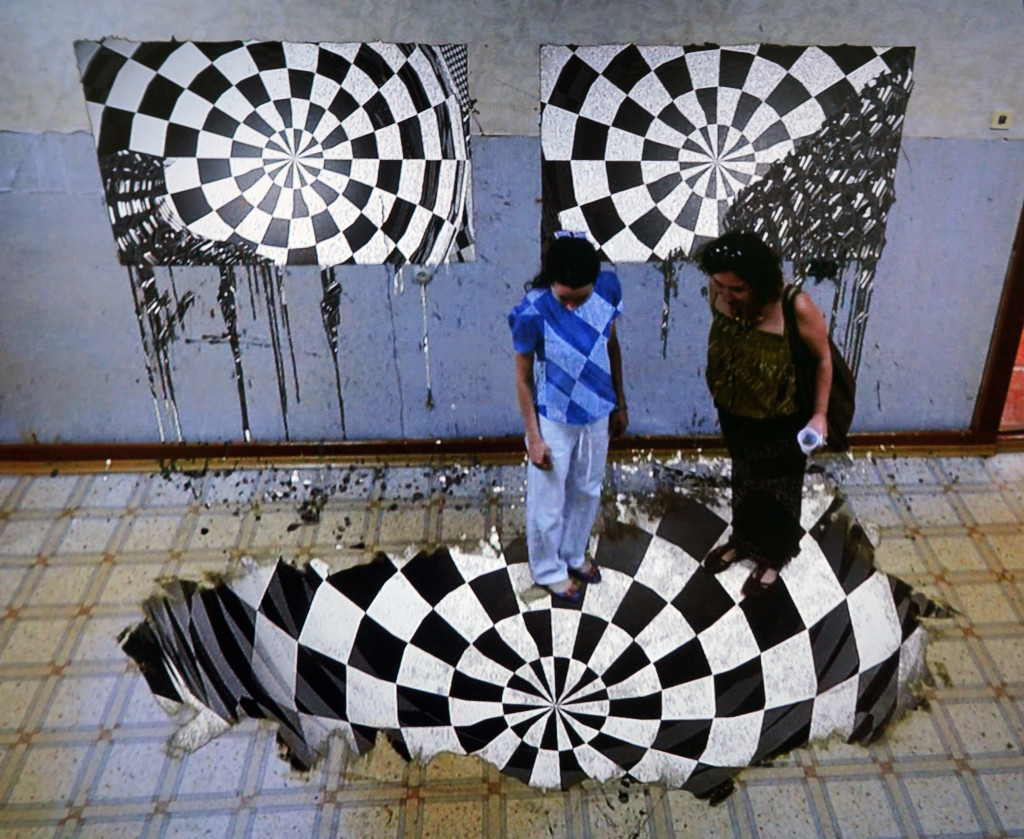 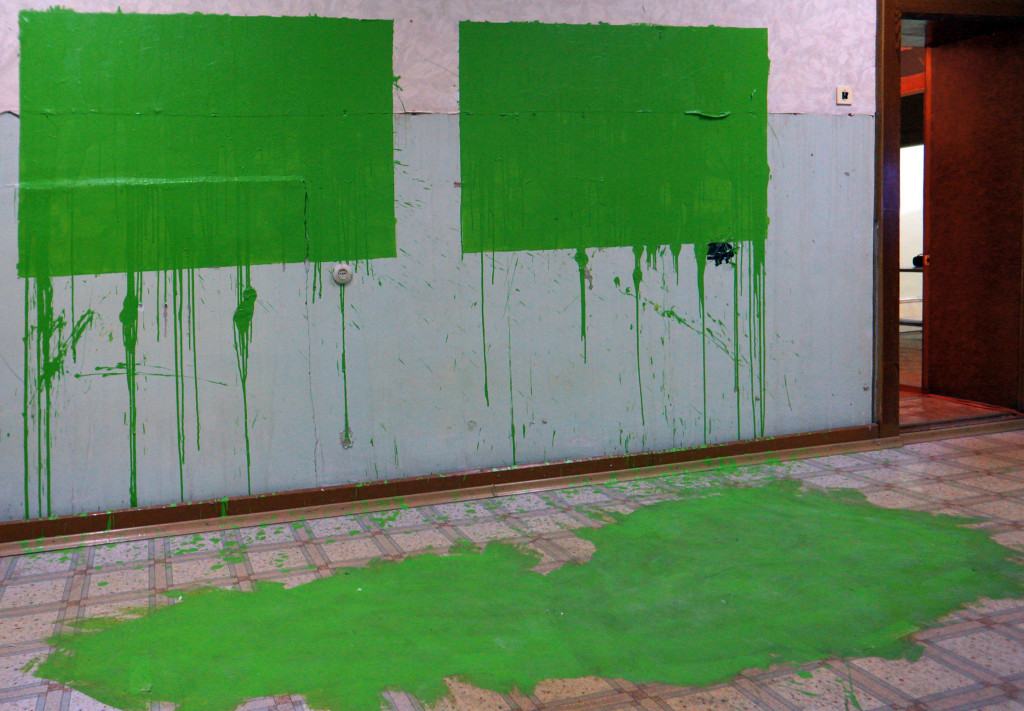 The fulfillment is a common mechanism of completing everything in nature and culture due to internal and external resources, the ratio of which does not involve any mechanical adding from the outside, nor the dialectical disclosure of preset internal capabilities by resolving contradictions. The fulfillment is not “nothing” but ”something”: if you have a fulfillment, so the whole is not whole, but something that permeated the lack of an internal flaw. 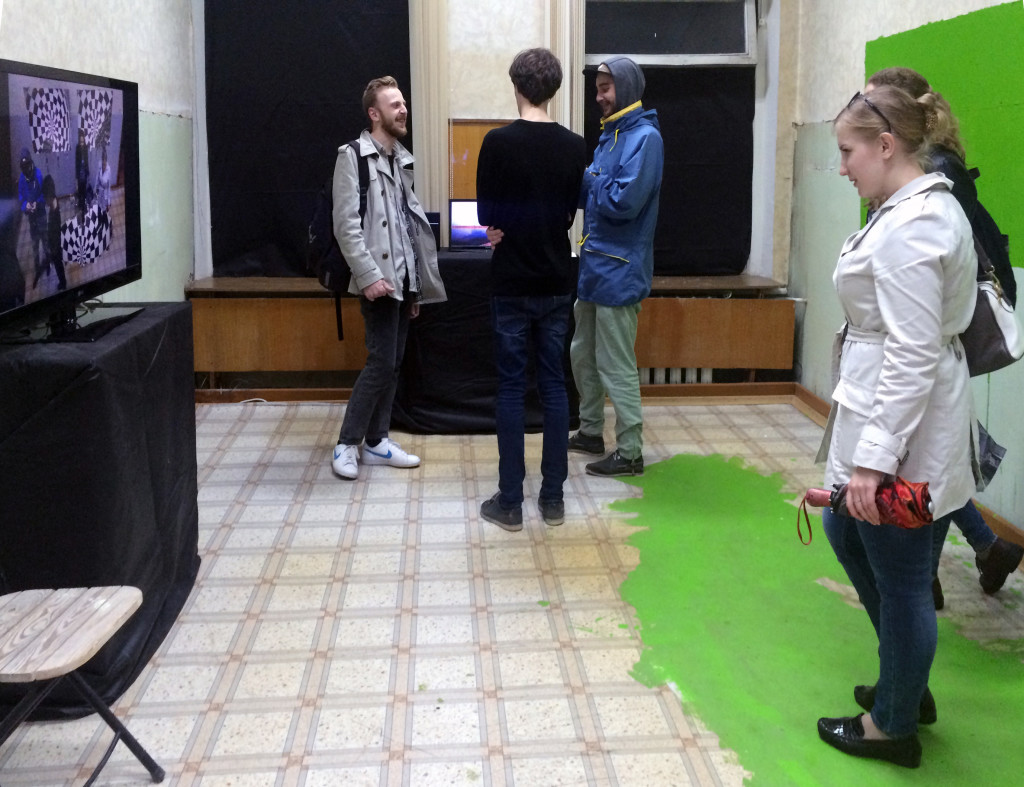 installation of additionality” (2016) concludes the exposition. The author uses the technology of chroma key, which is create backgrounds for shot in-Studio scenes in the film industry. The installation consist of a screen with camera, which records viewers in a real-time takes on a background of green rectangles. Entering the field of view of the camera, the audience see themselves on the digital background imitating plaid checker-texture from 3D modeling programs. Thus, the real person is transformed into a three-dimensional model. In this work utilizes the idea of the virtual world, in which man plays a central role. The viewer becomes part of the observable space on the screen; artist creates system of images with a deep immersion, where the behavior and the content of the image space depends on the actions of the viewer. Such a strategy may be called escapism, idea that increasingly exploit by the artists and theorists, trying to break free from the global structure of the existence of certain systems of behavior, to extricate yourself from the compelling developments in the world, which is increasingly difficult to influence. Creating your own virtual world, the artist presents a space to the viewer, which is removed from the general concept of the world, space in which it is possible to be alone, to look at yourself without any of the outside world.

On the other hand, augmented reality is gradually becoming a part of our visible world as well as familiar objects – a table, mirror, wall.

The artist explores these questions in his work. Understanding the future is inextricably linked to understand the present as an irreversible natural process. Digital nature cannot oppose biological, as it is its logical continuation / conversion. New technologies affect the natural evolution of our thinking, just as on the development of the artistic language of visual art that we clearly see in the works of Oleg Elagin.