“The new sensualities can be opened through technological progress” М.A. Lifshitz 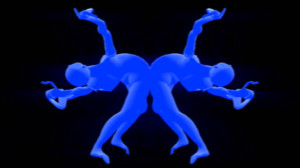 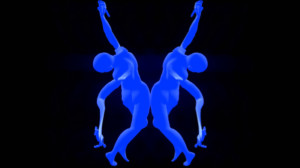 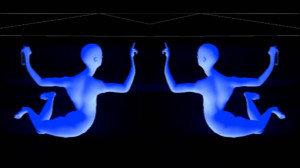 “Technical civilization” and changing along with her everyday life, more and more saturated by technique and technology, require new vision and hearing, new sensuality and new reflexivity, changes historically formed patterns of instincts and reactions.
“new human” should show a complete contrast to the real person. This is a human speaking in another language, having different gestures, obeying different impulses.

This video is a strange dance in black weightlessness of space.
3d models is illuminated only by blue light, seems, like the humans, who perform whether a dance, or an acrobatic pas, like figures in the painting by Picasso “Acrobat”. The viewer instinctively synchronizes sound with motion of fingers models.
There is a feeling of indivisibility of the audiovisual field. Strangeness of movements refers to the technique of glitch.
In this work artist, hacking and upgrading the program code, detects (uncovers) hidden mechanisms of movement and interaction with space and sound in previously static model.