“Death among us”- this is action, held in December 2014 in Samara, Russia. There Was shown in real time on the screen of a mobile PC with the help of special programs for
work with augmented reality. This video is documentation, captured from the screen of a mobile PC.
It shows action and the reaction of the audience on an unexpected introduction images of death
in daily life. 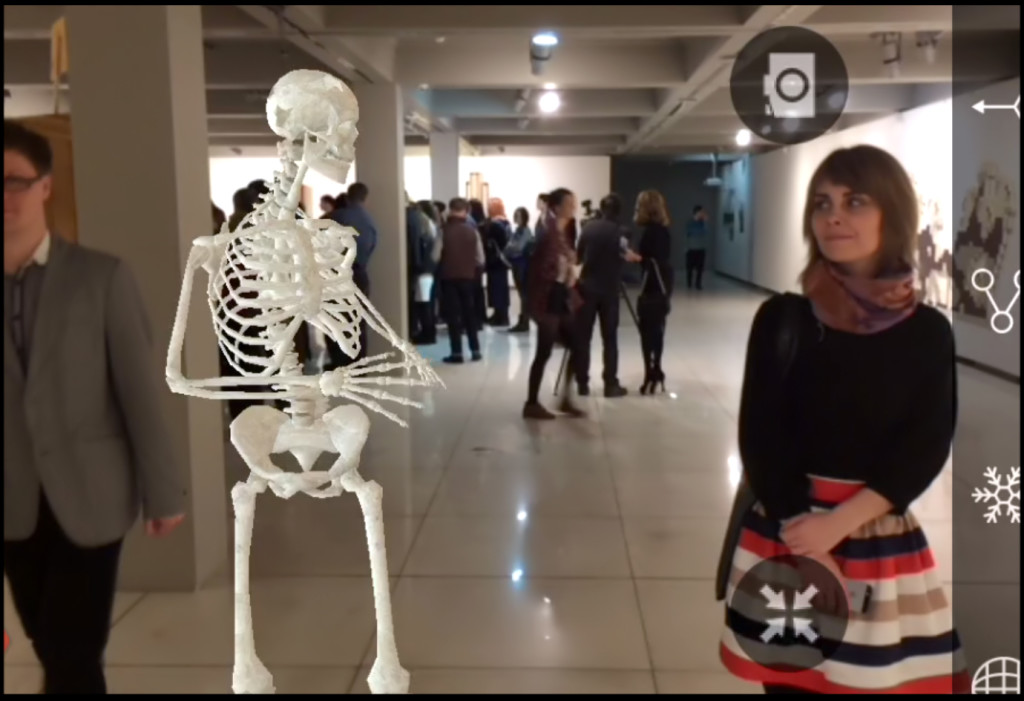 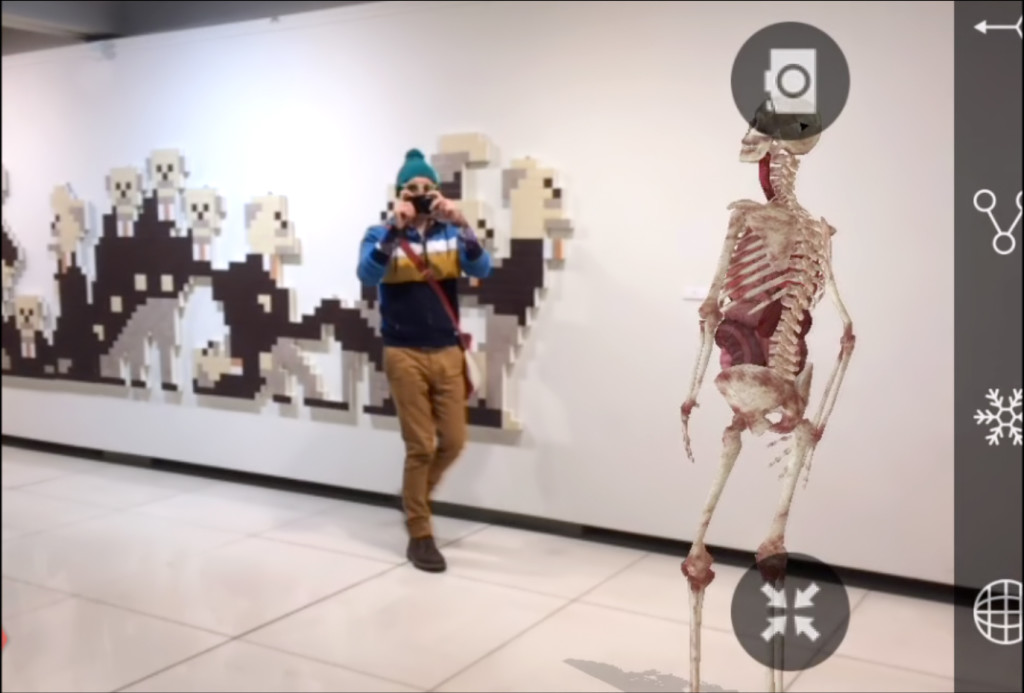 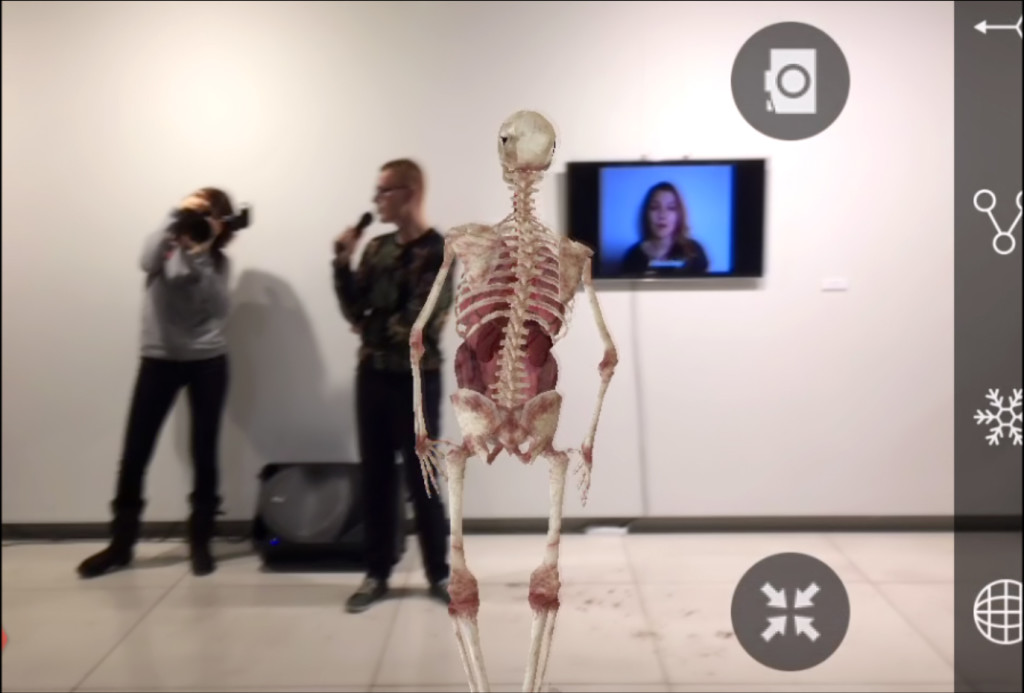 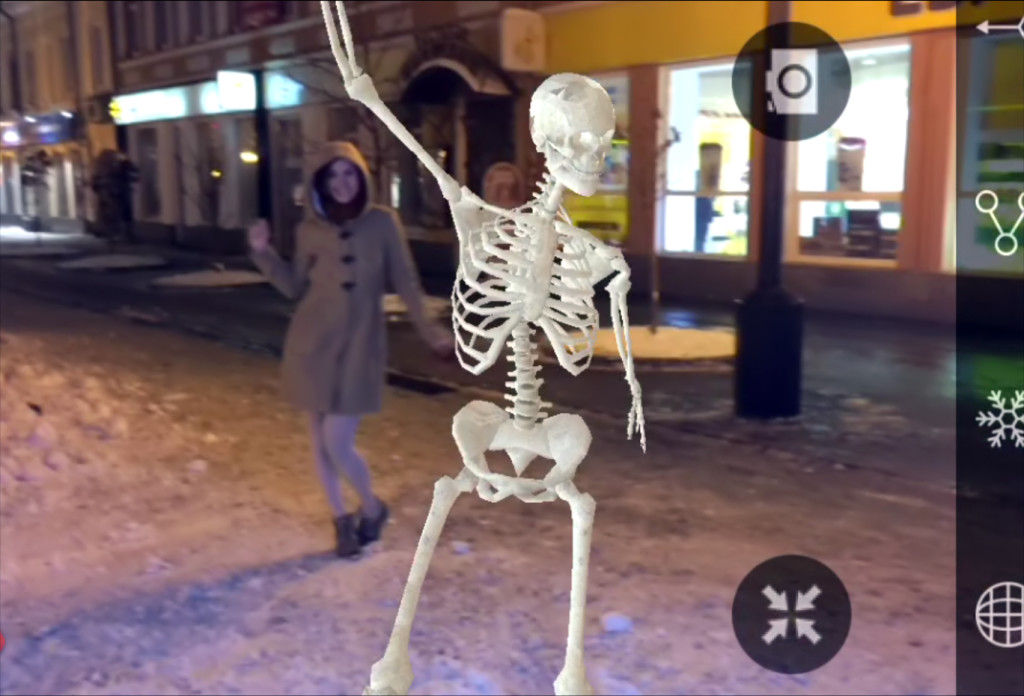 Oleg Elagin is media artist from Samara, whose main medium of visual statements is a digital technology. The production circumstances of his works: living in the city with an undeveloped art system, freedom from the curatorial pressure, openness to different kinds of art forced him to mobilize improvised technical devices and breach their well-established in everyday practical sense by translating them into unusual, disautomated way of human practices vision. Oleg Elagin’s strategy  is a digital aestheticization of everyday life. His task show us what cannot be seen without the use of technical media, to combine the human mind, which, of course, is determined by the social experience of the artist with the interpretation of the «machine-look» reality and the technology. Unlike other Oleg’s works, in his new work using computer programs and applications is targeted to produce an available even to a child wow-effect.

«Death among us» doesn’t need a genre attribution. Its pragmatic simplicity in the synthesis of the technical complexity is quickly decoded by the viewer and creates difficult definable reaction. Irony, existential anxiety, shock, attribution to the already-seen, the question “what is it?” etc.

“Death among us”. We are artistic community, exhibition visitors, rave participants, private people. Spaces of Death’s dance are spaces of artistic senses production. The characters dance and somehow interact with the Death. The digital image of Death (although the iconography of death in the form of skeleton is associated more with a revived corpse) is served in a comic form, no one dies in the video. The skeleton comes to life as soon as the community areas. It dances of the joy of co-presence with people, we see the fun joy of the resurrection of the dead. Skeleton, who is source of children’s fear in horror films, ceases to be scary. A duality of this image is principled: the appearance on the screen and the absence of “real” reality creates the effect of difference. Mobile phone screen calls the spirit of Death, which can scare people no more.

The viewer can see a Death itself through the phone screen. Although, if we consider the technical side of a work, we have a typical example of contemporary art technology, used it in an artistic purpose. Similar programs are used to digitize the human movement in computer games and animation. Computer animation becomes a live translation.

Negligence of the skeleton movement and its authenticity emphasizes a randomnicity of shooting location. Death can appear anywhere: in the gallery, in the street, in the TV studio – the main thing is that the program works. The artist works as a video engineer, and we can easily imagine a music video using this technology. The artist tames Death using with a digital program and frees us from the fear of it.

The difficulty does not preclude a transparency of the technology. Video does not deceive us, it doesn’t pretend to be a reality. The image of death artificially always. Only the process of dying or already dead objects can be shown, but not a death itself. Digital medium in Oleg Elagin’s work equalizes the living and the dead. The dead come to life and become death spirits called by the program.